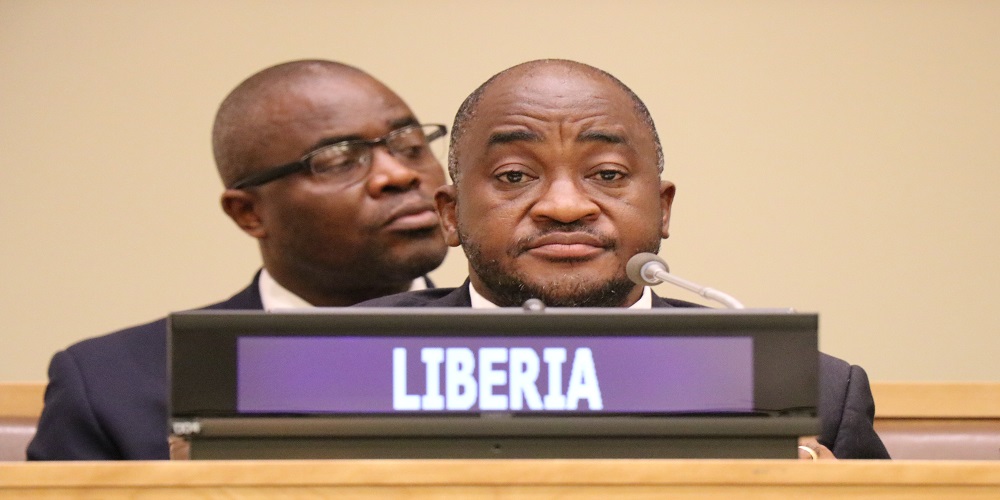 Liberia’s Ambassador Extraordinary and Plenipotentiary, and Permanent Representative to the United Nations, His Excellency Ambassador Dee-Maxwell Saah Kemayah, Sr., has lauded the International Community for its overwhelming support during the recent June 7 protest in Liberia.

Ambassador Kemayah said the International Community clearly articulated its perspectives, emphasizing the need to protect, reinforce, and sustain the democracy, peace, and security in Liberia.

Ambassador Kemayah described the International Community’s action, as a “genuine manifestation of its renewed and unwavering support for the endeavors of the Government of Liberia and continuity of democracy, peace, security, and development in Liberia”.

Said Ambassador Kemayah: “On behalf of His Excellency Dr. George Manneh Weah, President of the Republic of Liberia, the Government and People of Liberia, I would like to extend our deepest gratitude to the International Community for its continued and immeasurable support. Many of you played a very integral role in the outcome of the just ended protest. Truly, as His Excellency President Weah has stated, the young and promising democracy in Liberia was “tried, tested; and it has proven to be mature, resilient, and strong. We would not have come this far without the invaluable support of the international community and the resilience of the Liberian people. Today, we feel more assured with the renewed commitment coming from the international community to support the endeavors of the Government and People of Liberia for the sustenance of a peaceful, democratic, stable and prosperous country. We laud ECOWAS, the AU, the United Nations and other members of the International community for being very pro-active, and forthright in articulating their perspectives on the protest. We note ECOWAS expressed its disappointment that the petition by the protesters was not delivered to the officials of the Liberian Government on June 7, in spite of all the elaborate mediation efforts and arrangements made by the Government, Local and International Stakeholders; in relation to the protest.”

The Liberian Ambassador to the United Nations assured the International Community that despite the action of the protesters, the Government of Liberia under the Leadership of His Excellency President George Manneh Weah remains resolved to do all it can to sustain democracy, peace, security, and development for all in Liberia.

Ambassador Kemayah recalled that the Government’s resolve was evidenced by the way in which it responded and guided the June 7 protest-- creating a peaceful and safe environment for protestors to assemble; an act that was commended by the International Community.

Ambassador Kemayah then reminded Liberians that “we all have a shared responsibility to continue to thread the path of sustaining democracy, peace, security, and dialogue”, and encouraged all Stakeholders to take advantage of the opportunity for the round-table dialogue proposed by His Excellency President Weah to constructively engage with the Government.

The Liberian Diplomat was speaking during a meeting of the Liberia Configuration of the United Nations Peacebuilding Commission at the UN Headquarters in New York. Ambassador Kemayah proposed the meeting to take stock of economic, political and social developments in Liberia within the framework of the Pro-Poor Agenda for Prosperity and Development, and consider the Liberian Government’s response to the June 7 protest.

Ambassador Kemayah used the meeting to reiterate his call for support for the full implementation of the Pro-poor Agenda for Prosperity and Development, and the Liberia Multi-Partner Trust Fund (LMPTF); policies that are aimed at supporting Liberia’s efforts to sustain democracy, peace and security; and implement the 2030 Agenda, and the Sustainable Development Goals (SDGs).

“There is no quick fix to an extremely broken economy which was inherited by the administration of His Excellency President Weah. As the Government of Liberia makes continuous efforts in shaping the economic landscape of the country, we crave the assistance of all of our partners to continue to place Liberia on the front burner.  We encourage sustained and robust engagements in discussing Liberia’s peace, democratic and development priorities. We need assistance for road connectivity, coastal highway, job creation, electricity, forestry, agriculture, healthcare, education, youth and women empowerment; just to name a few. Most of all, we encourage support from all of our partners for the full implementation of our Flagship National Development Plan – the Pro-poor Agenda for Prosperity and Development, and the Liberia Multi-Partner Trust Fund (LMPTF). Ambassador Kemayah emphasized.

Ambassador Kemayah stressed that“support for the Pro-poor Agenda for Prosperity and Development will bring about much-needed revival in the Liberian economy; ensure that Liberia becomes self-reliant in food production; particularly growing our stable food – rice; and largely enhance the empowerment and livelihood of the Liberian people.”