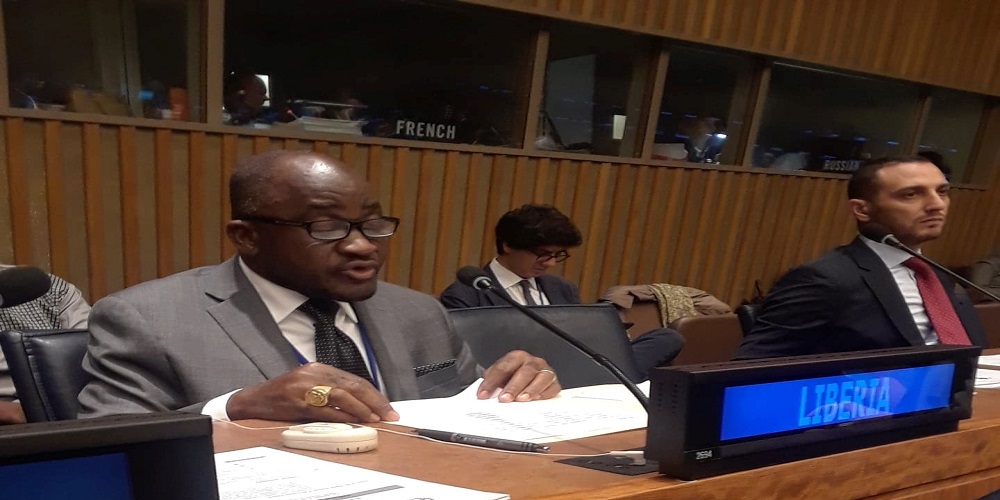 Liberia's Ambassador Extraordinary and Plenipotentiary and Permanent Representative to the United Nations, His Excellency Ambassador Dee-Maxwell Saah Kemayah, Sr., has described culture as an enabler and a driver of the economic, social and environmental dimensions of sustainable development.

Ambassador Kemayah told a High-Level United Nations General Assembly (UNGA) Meeting on Culture and Sustainable Development, that in order to achieve the Sustainable Development Goals, United Nations Member States should be champions of cultural diversity, while investing  creative energies in promoting and preserving our common heritage – humanity; for the benefit of present and future generations.

Ambassador Kemayah named cultural heritage, culture and creative industries, and culture tourism as potential contributors to revenue generation, which fosters sustainable development and contributes to the economy and poverty alleviation.

The Liberian Envoy to the United Nations told the High-Level Meeting that Liberia has a rich cultural and historical heritage and a wide variety of tourist attractions. Ambassador Kemayah revealed that the Government of the Republic of Liberia, through its Ministry of Information, Cultural Affairs, and Tourism, has developed a strategic plan which focuses on improving and preserving heritage, eco-and wildlife tourism structures.

A dispatch from the Permanent Mission of Liberia to the United Nations quotes Ambassador Kemayah as saying that "the plan also seeks to promote the tourism industry in Liberia; as one of the economic pillars for growth and job creation, consistent with Liberia's National Development Framework--The Pro-poor Agenda for Prosperity and Development (PAPD) and the unwavering commitment of His Excellency, Dr. George Manneh Weah; President of the Republic of Liberia".

Ambassador Kemayah also used the occasion to highlight the link between culture and education; while stressing the importance of concerted efforts to fully support cultural and creative industries; especially within local contexts.

Said Ambassador Kemayah: " The interplay between culture and education has shown that the two can, among others, foster social equality and inclusion; and enhance economic opportunities. It has been further underscored that the roles of culture on one hand; and education on the other, are vital components of the sustainability equation. It is said that; culture is who we are; and what shapes our identity; education facilitates the development of cultural values. Strengthening the foundations and pillars of sustainability is important. We believe that this can be done through concerted efforts by ensuring that our cultural and creative industries are fully supported, and that; development interventions are responsive to the specific needs of the people they are intended to serve; as in development, it is not “one size fits all”. Therefore, it is important to enhance educational curricula by adopting and incorporating within the local context."

Ambassador Kemayah stressed that when all of its dimensions are leveraged, culture as a vehicle can engender equality, women and youth empowerment, inclusiveness, and sustainable economic growth and development.

The Meeting among others, provided perspectives about the instrumental role of culture in providing opportunities for decent work, poverty reduction, social resilience, gender equality and other aspects of the Sustainable Development Agenda; and illustrated how culture, artistic education, and creative industries contribute to the realization of development targets in providing innovative solutions in urban and rural, national and local contexts.