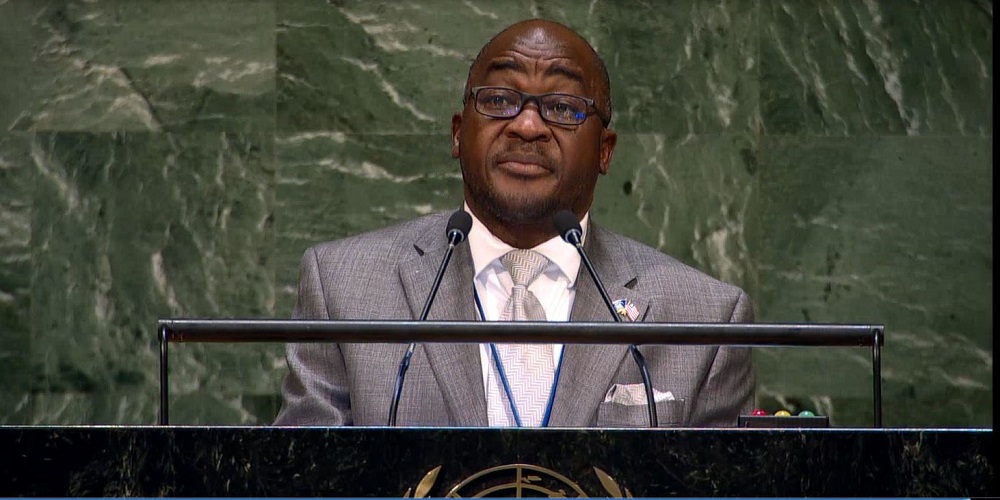 Presenting Liberia's progress report on the implementation of the Declaration of Commitment on HIV and AIDS and the Political Declaration on HIV and AIDS, His Excellency Ambassador Dee-Maxwell Saah Kemayah, Sr., Ambassador Extraordinary and Plenipotentiary and Permanent Representative to the United Nations, said Liberia has steadily implemented its commitments; in terms of reducing new HIV infections and AIDS-related deaths; reduction in mother to child transmission; and in increasing the number of people living with HIV on Antiretroviral Treatment (ART).

Ambassador Kemayah disclosed that at the end of 2018, Liberia had reached 66-53-52 percentages; respectively. The percentages translate that  26,000 out of an estimated 39,000 persons know their HIV status; 13,880 of those who knew their status were on Antiretroviral Treatment (ART), and 1,452 patients of the 2,804 screened for viral load were showing that they were virally suppressed.

Ambassador Kemayah attributed the progress to the development of a two-phase "Catch Up Plan" in 2016, by the National AIDS Commission of Liberia. " In line with the Global Vision to End HIV and AIDS as a global health threat by 2030, and to leave no one behind; and in keeping with the Strategy to implement the Fast Track Approach to avert new HIV infections and AIDS-related deaths, the National AIDS Commission of Liberia developed a Catch Up Plan in 2016 which went into effect in January 2017, and is expected to end December 2020. The two-phase Catch-up Plan which serves as a supplement to our National Strategic Plan; effectively seeks to triple the current testing and treatment figures within a short window of opportunity to fast track progress towards the 90-90-90 global targets by 2020." Ambassador Kemayah emphasized.

The Liberian Envoy further reported a steady improvement in the Prevention of Mother to Child Transmission (PMTCT), noting that final results from a recent Ante Natal Care (ANC) survey put the HIV prevalence among pregnant women at 2.4%. The increase in the number of available Prevention of Mother to Child Transmission (PMTCT) centers offering counseling and testing to pregnant women across the country, greatly contributed to the progress. The number of centers is now Four Hundred Thirty-Three (433). Early infant diagnosis initiated following the Ebola crisis, to determine the HIV status of infant exposed to HIV, also shows a decline in new infections in infants.

Ambassador Kemayah explained that Liberia’s approach to addressing the HIV/AIDS epidemic, has been characterized by persistent efforts in strengthening collaboration with local and international partners, research and assessments, with emphasis on key population groups; with the aim of determining the trend of the epidemic and in exploring ways to mobilize resources at the domestic level.

Said Ambassador Kemayah: "Key population groups continue to be the major drivers of the epidemic in Liberia. A Size Estimate study conducted in 2017 documented a major increase. These groups now account for over 79% of the estimated number of persons living with HIV in the country. The National response has included various platforms and interventions to mitigate the increase in HIV prevalence among key population groups. Under the stewardship of the National AIDS Commission of Liberia, steady progress has been made in creating the necessary environment for addressing the epidemic among key population groups; such as men having sex with men (MSM) and female sex workers (FSW). Several Drop-in-Centers (DIC) now provide free and safe access to care and treatment services for key population groups."

In addition to research and assessments, Ambassador Kemayah highlighted that primary HIV prevention remains a central component of Liberia's AIDS response strategy, and noted that behavioral change communication and condom distribution programs have successfully reduced the incidence of HIV infection in Liberia. Ambassador Kemayah stressed that "most importantly, the Response Strategy has included strengthening awareness and information amongst young people. With support from the United Nations Technical Group (UNTG), age-appropriate life skills education, particularly, targeting adolescents, have been conducted both in and out of schools.  HIV counseling and testing (HCT) have also been promoted."

Despite the ongoing progress in addressing the HIV/AIDS epidemic, Ambassador Kemayah informed the United Nations General Assembly that inadequate funding, and a struggle to retain People Living with HIV (PLWHIV) on care, remain key challenges. Other challenges include; poverty, resulting in inadequate nutrition; not having prompt access to medical facilities due to long distances patients have to travel; stigmatization, and discrimination.

In spite of these bottlenecks, Ambassador Kemayah assured that "the Government of Liberia, under the astute Leadership of His Excellency Dr. George Manneh Weah, remains resolute and committed to the Global effort to rid the world of this scourge by the target date of 2030."

The Liberian Envoy then thanked on behalf of His Excellency President Weah, the Government and People of Liberia, the Global Fund, UNAIDS, WHO, USAID, WFP, and other partners  for their continued support to Liberia's efforts and called for the consistent galvanization of financial resources to bolster efforts in achieving the global objective of 90-90-90.